The following text was sent to us from Steve who visited Ios in July 1969. This is his story about how the island once where before it was discovered by mass tourism.

In 1966 I was fortunate enough to be able to spend three months in Europe, doing whatever I wanted to do, wherever I wanted to do it. As I was preparing to return to the States, there was one of the first airline workers’ strikes and I was stranded in London, during which time I met a German girl with whom I had a three year long correspondence which lead to my returning in ’69 in order to continue our relationship on a more physical and permanent basis.

Didn’t work out. I’ll spare you the details.

Since I had purchased a VW new from the factory (I know, it sounds extravagant, but I sold my beloved BMW motorcycle to finance the trip), I decided that instead of simply returning to the States with my bride-to-be, I turned south, towards France, to see what would happen.

Ended up in Madrid, hanging out with a former teacher, and while I was there, ran into to a couple of guys at the youth hostel who had just returned from Greece, brown as berries, and I asked them where they had been. They didn’t really want to tell me, saying that to divulge the name of the place would be to ruin it. I begged to know the secret and promised (a promise I kept) never to tell, and they finally gave up the name of the place: Ios. The next morning I called my former teacher, informing him of my sudden departure, and drove almost non-stop to Brindisi, Italy where I found a garage to keep my car and caught a ferry to Piraeus, where the hostel was located just next to an outdoor cinema showing Sergio Leone spaghetti westerns which we could see from the terrace above …

The ferry to Ios was forced to stop at Naxos because of the weather. People throwing up everywhere, the boat jumping this way and that. I found refuge in a large coil of rope on one of side decks and then under a truck once we left Naxos.

The sea calmed, the sun came up, and soon we found ourselves in the small bay of Ios. We anchored out, and small, wooden, hand-crafted boats came rowing out towards our ferry and the exchanging of goods took place as well as the one boat that took the passengers who were coming to the island. I think there were five of us, and I was the only foreigner who scrambled down a rope ladder, and we all helped pass the caged chickens. Then a couple of guys who had come with the boat brought out their instruments and started playing and we sang our way up to the jetty. Thought I was in a movie.

The rowing and the singing and the passing of a bottle of retsina (no kidding) was enough to let me know I was in good hands. Despite the storm that had forced us into Naxos, we had indeed, finally arrived, and it was wonderful. 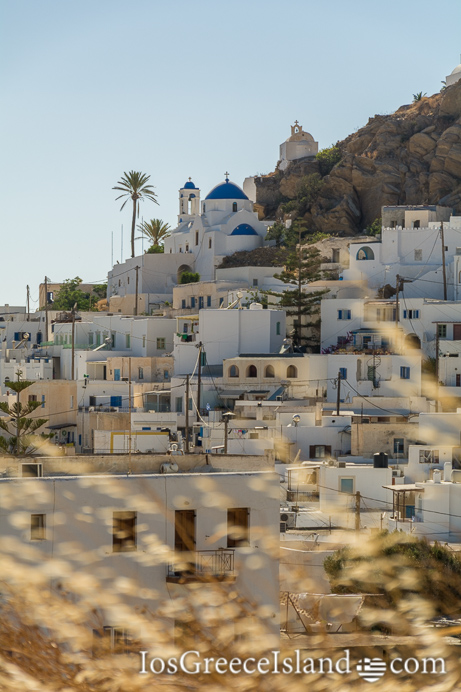 The stones of quai, gentled by who knows how many years, was my first touch of island life. We helped each other up out of the boat and I stood there looking about, wondering what I was doing in this little port village. Just opposite was a kind of cafe/restaurant, chez Tassos. There was no one about, but I went in anyway, ran into the owner who, figuring out that I didn’t speak much Greek, called in his daughter who spoke very good English (having studied in Athens and who was there for the summer to help), and basically, my problems were solved. She told me about the farmer up the hill, and I settled into a very good lunch and a great contact for the rest of my days there.

I had landed. All of a sudden I felt very much at ease. I wasn’t much concerned about where I would sleep. I knew it would be just fine, just what I needed.

I took the cobbled path up between a few houses and stopped at an almost subterranean taverna (couldn’t help myself) where, in spite of the language difficulties, I had another coffee and a few of something that could be called a brandy, and exchanged stories that may or may not have been true, got a good look at a fierce looking knife, and was ushered out into the sunshine and on my way to the famous farmer on the hill.

Famous he may or not have been, but he was awfully nice once I found him. Yes, he was thinking about building something for “the tourists” that some said were sure to come, but that for the time being, all he had done was put a kind of shower out behind his house. And yes, he did have a couple of beds and mattresses and what if we put them down there, under the pear trees, down there on the third terrace down from his house?

We did that, carrying down the metal beds and the thin mattresses, arranging them under the pear tree whose lower branches would serve as our closet.

And so our discovery began. Absolute silence but for the cicadias, the buzzing of the flies, the occasional bleat of a sheep. There was one car on the island, an old Chevrolet station wagon, that made its rounds on its own time, and that we seldom saw. Absolutely nothing “to do” but doing what you wanted, what you could invent for yourself. For me, that meant doing nothing other but swimming and sunning, eating melons and seafood and drinking retsina in the shade, and reading and writing, and wondering about a lot of stuff that I had, for the moment, left behind. And wondering why I ever needed to go anywhere else. Knowing that I had to leave one day, but not wanting to think about it.

And so we got to know Tassos and when the “tourists” (a few French and American artists/writers and their entourage) began to arrive and things got a bit hectic at the resto, we gave him a hand, and that was the best part. We could laze away our days and help out in the evening and share in the family meal well into the night. We were included.

I remember the day we left. We were chez Tassos, having a last retsina and melon, when this fellow, a plump, sunglassed, gray-haired fellow in a linen suit asked us if he could join us. He asked us if we had enjoyed our stay on the island. Yes we had. He said he was thinking about building a hotel. I knew it was time for us to leave.

What can I say? The hotels, and everything else, have been built, and the only thing I have left are the memories.