This is a story that David sent to us and it is about his travel to Ios Greece in the summer of 1978. Read about how the island was back in those days. If you like to share your story about Ios then use the contact link above.

I went to Ios in 1978 after I finished my undergrad degree and had been accepted into law school. I was on holiday in England for the summer with my parents and they offered to pay for a side trip to get some sun. We went into a tourist agency and I looked through some brochures. I came across a page about Ios and it said that there were some nude beaches on the island and being a typical 20 year old red blooded guy I told my parents I wanted to go to Ios but didn’t show them the brochure.

I flew to Athens and then got a bus to Piraeus harbour.  The ferry was packed with people travelling back to their homes on the islands so it wasn’t just tourists. There was no place to sit inside and the outside was so full of people I just kept moving with the crowd until I reached the top of the ship, between the funnels and found a chair to sit on.  More and more people kept coming and some had to sit under the chairs or under life boats.  We set off in blazing sunshine on what turned out to be a 10 hour journey stopping at a number of islands before arriving at Ios.

I was booked into a Taverna on the far side of the main harbour beach.  An old man with a donkey carried my bags.  The Taverna was so basic with bare walls and a bathroom with a sink and toilet and a shower which consisted of a shower head in the ceiling and a chain to pull on. 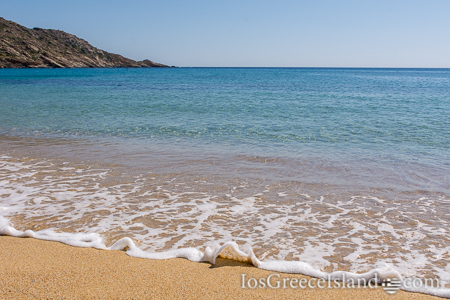 I set off in the morning to a beach which was completely nudist and found a secluded rocky perch to put my towel on.  I stayed there until the sun was almost setting and then went back to my room, got dressed and went to a café/bar on a cliff overlooking the harbour to watch the sun go down with classical music playing until the sun had sunk below the horizon. Then I would find a place to eat and then a bar to sit and drink Ouzo until bed time.

I tried the other large beach the other side of town which was also nudist.  It was my first experience of this and it was incredible.  I felt so in touch with nature. No cars, no noise, no clothes, no worries. It was a wonderful two weeks and I ended up with a fantastic all over tan the likes of which I have never had since.  It was the most uninhibited, relaxed holiday I have ever had.

Thank you David for sharing this your story with us. If anyone else like to share their story about Ios Greece then use the contact link above to send it to us.